In New York State, local governments have broad authority for pursuing policy actions to protect their conservation priorities. The following list includes some examples of policies used by municipalities in the estuary watershed.

Municipalities may designate conservation priorities that meet certain criteria under State Environmental Quality Review (SEQR) as critical environmental areas (CEAs). For example, characteristics of CEAs may include exceptional or unique natural setting, recreational value, or ecological sensitivity. The designation serves to alert project sponsors of the community’s concern for the CEA’s resources, which then need to be considered and addressed during environmental review. The DEC describes the process of adopting and implementing CEAs in Chapter 2 of The SEQR Handbook (2020) and maps of existing CEAs can be viewed on the DEC website.

In 2019, the Town of Wawarsing (Ulster County) designated two CEAs that were identified as priorities in its open space plan. One CEA is 3,000 acres of forests and fields that provide a landscape connection between the Catksill Mountains and Shawangunk Ridge, and one is an 8,000-acre wetland complex surrounded by forest, with rare species and trees that are nearly 500 years old. Both areas are also included in the NYS Open Space Conservation Plan. The Wawarsing CEA case study is explored in this video.

The Town of Hyde Park (Dutchess County) designated four CEAs in 2009, based largely on biodiversity data received from our Conservation and Land Use Team. The CEAs contain high-quality ecological communities including hemlock-northern hardwood forest, red maple-hardwood swamp, woodland pools, and freshwater intertidal mudflats, with habitat for species of conservation concern like the swamp cottonwood tree and Blanding’s turtle.

Overlay zoning adds new standards to the existing, underlying zoning and can allow a municipality to direct development away from environmentally sensitive areas. Like CEAs, overlay district boundaries can be drawn around natural features or resource areas of value; however, unlike CEAs, the overlay zone gives the municipality greater regulatory authority over density, use, and other factors that might impact the quality of the area.

Our program funded the development of a new publication, Creating Conservation Overlay Zoning: A Guide for Communities in the Hudson River Estuary Watershed in 2022 to support municipalities interested in using overlay districts to conserve natural areas and site future development. A previous publication, Conservation Area Overlay District: A Model Local Law from the Metropolitan Conservation Alliance (2002), provides an overlay template for municipalities to customize. 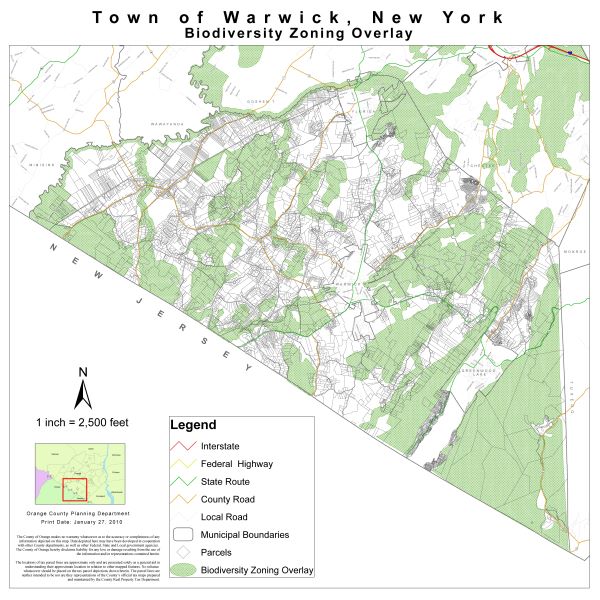 The Town of Warwick (Orange County) used the priority conservation areas identified in the Southern Wallkill Biodiversity Plan (Miller et al. 2005) as a basis for its Biodiversity Conservation Overlay District. The district was created in 2010 to promote the well-being of town residents while protecting the integrity and value of natural areas, watersheds, and significant biological resources in Warwick, by adding a habitat assessment process to town decision-making in areas of concern.

The Village of Woodbury Water Quality Protection Overlay District is described below.

To increase protection of wetlands, streams, and floodplains, municipalities in New York can use their home rule authority to adopt their own laws. Local laws can fill in the gaps left by limitations in State and Federal protections, by having broader definitions, larger buffer areas, and more regulated activities. Options for municipalities to protect their wetlands and watercourses, including setbacks, overlay districts, zoning standards, and laws, are described in detail in Chapter 2 of NYS Department of State's Model Local Laws to Increase Resilience (2019). Another relevant publication is the Planner's Guide to Wetland Buffers for Local Governments (2008) from the Environmental Law Institute.

Wetland and Watercourse Protection in Practice

The Town of Woodstock (Ulster County) Wetland and Watercourse Protection Standards regulate activities that might affect wetlands of any size, with 100-foot buffers for wetlands larger than 0.1 acre and 50-foot buffers for smaller wetlands; and any natural, artificial, permanent, seasonal, or intermittent waterway, with buffers ranging from 30 to 100 feet. A wetland and watercourse inspector has the responsibility of enforcement and processing permits.

The Village of Woodbury (Orange County) amended its code in 2020 to create a Water Quality Protection Overlay District. Within the district, certain activities are limited in order to maintain an undisturbed 50-foot riparian zone and new development activities are regulated in a 100-foot buffer zone. The regulation applies to intermittent and perennial streams, ponds, lakes and other surface waters.