The Hudson River begins as a small mountain lake on the side of the state’s highest peak, Mount Marcy, and ends in New York Harbor, one of the world’s busiest and most populated metropolitan ports.

About halfway along its course it becomes an estuary, an arm of the sea, that provides spawning and nursery grounds for commercially valuable fish and crabs. The river’s uplands are covered with forests interspersed with working farms, residential development, and small cities. The varied geology of the watershed creates a tapestry of habitats, including streams, grasslands, pine barrens, cliffs, mountain ranges, caves, and wetlands, including globally rare freshwater tidal wetlands. This mix of habitats gives the region exceptional importance and supports a high diversity of species of global and national significance. 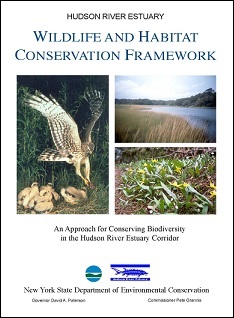 By describing 23 areas of biodiversity significance, the Framework provides a science-based, watershed vision for conservation planning at both local and regional scales.

Read more about Significant Biodiversity Areas described in the Framework on the Conservation Priorities page.