Conservation Priorities in the Watershed

"The ultimate purpose of biodiversity conservation is to conserve the entire complement of species, habitats, and processes so that ecological function can be sustained."
Penhollow et al. 2006

At the local level, conservation priorities should reflect what a community values, but they can also take into account what is known about larger-scale, regional priorities. The following section describes conservation priorities that have been identified in the estuary watershed through scientific analysis and input from many partners and stakeholders. When individual and community actions can support these regional priorities, there is greater opportunity for successfully protecting the estuary ecosystem.

The Wildlife and Habitat Conservation Framework (Penhollow et al. 2006) was based on a decade of inventory and study that cataloged the species and habitats that form the ecosystem of the Hudson River estuary watershed. While ongoing analyses continue to improve our understanding of conservation priorities, the following major habitat types described in the Framework remain the most significant in the watershed, along with their associated wildlife and plants. The following list includes highlights about these habitat priorities; to learn more, refer to Part II of the Framework.

The Framework recognized 23 significant biodiversity areas (SBAs) in the watershed, including a Hudson River Estuary Area of Biological Concern that encompasses the entire estuary corridor, due to its national significance for biodiversity in New York, New England, and the mid-Atlantic region.

The SBAs carry no regulatory designation. They were intended to encourage coordination of conservation partnerships between willing stakeholders and provide a mechanism for communicating information about biodiversity in the Hudson Valley. New data sets, such as core forest habitat or marsh migration pathways, can be used in conjunction with the SBAs to further inform conservation planning. 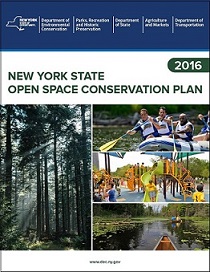 Many of the conservation priorities in the estuary watershed, including significant biodiversity areas, are included in New York State's 2016 Open Space Conservation Plan. The plan serves as a blueprint for the State's Open Space Program, guiding the investment of land protection funds from the Environmental Protection Fund. Goals of the plan range from protection of water quality and wildlife habitat, to addressing climate change and health of local communities.